Hike your own hike (HYOH) is a term used frequently in thru-hiker and section-hiker circles. It was a new term for me, up until I actually got out on the trail in late October. Until about six months ago, I had no idea what thru-hiking, white blazing, or yellow blazing was. It was all foreign to me. By the time I was on the trail, I understood it all much better. To actually meet some thru-hikers and section-hikers on the trail gave more clarity to the whole experience. It also brought into focus that I needed to HYOH. 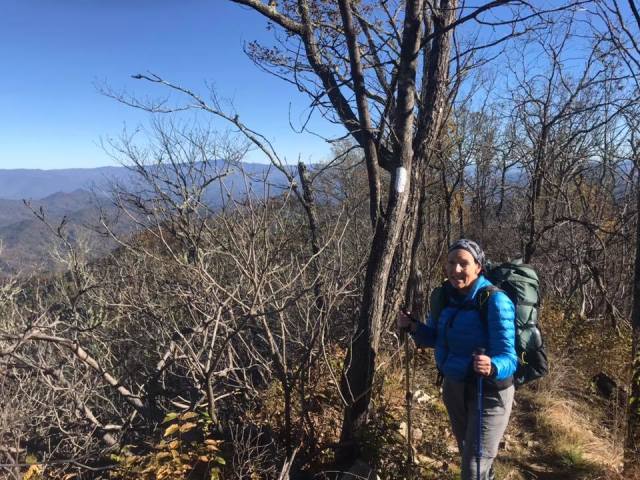 There are three main thru-hikes in the United States. The Pacific Crest Trail (from Mexico to Canada on the west coast), the Continental Divide Trail (along the Continental Divide from New Mexico to Montana) and the Appalachian Trail (from Georgia to Maine). To complete all three hikes is called the Triple Crown. You can head northbound or southbound on the trail (most people head northbound) and there is something called a flip-flop, when you get off the AT in Harper’s Ferry and head the opposite direction, so maybe Georgia to Harper’s Ferry and then Maine back to Harper’s Ferry. There are all sorts of variations on the flip-flop as well. White blazes are the markings found on the AT and blue blazes mark either scenic bypasses to denote a waterfall or occasional detours around bear-infested areas, fires, or other torrential weather. To yellow blaze is to “cheat” and take a ride via a vehicle to bypass part of the trail. These are examples of basic terminology used by the community of thru-hikers and section-hikers out there on the trail.

This is what I learned about HYOH:

This is the essence of HYOH and it is SO hard to get your arms (er…) head around. On the day my boyfriend Roy and I headed out on the AT to Wesser Bald Shelter, I was constantly comparing myself to those we met on the trail. At about 3 miles in, we met a group of guys, with maybe nine of them coming down the trail in the opposite direction. They were affable, stopping to chat, everyone seemed in lock step; as if they were on a Sunday stroll. I was panting. Out of breath. And hoping I wouldn’t fall off the trail and that they could squeeze by me on the switch back. Later, there were what looked like twin eight-year-old girls bopping down the trail in matching fuzzy jackets with two women in their mid-thirties, presumably one being their mother. I was thinking, what Hampton Inn did they roll out of this morning and how the heck are they going to navigate that slide down the trail that I lost my water bottle on. As you can imagine, this was completely unproductive. Comparison is soul crushing. It just doesn’t matter where you are on the trail compared to others. Let them hike their own hike and you can hike your own hike.

I’m guessing that we met about five groups of people hiking the opposite direction on a Sunday. Odds are that their end destination was the Nantahala Outdoor Center (NOC). Our endpoint was a shelter no where close to civilization. No running water, no king size mattress, no heater. They were most likely headed to a car or to a room at the NOC. I was headed into the great unknown of sleeping outside in a tent and in a sleeping bag; this coming from someone who had never been out in the elements. I was starting to envy these folks headed back to a known reality. They were all headed downhill. We were headed uphill. In reality, I had absolutely no idea what those folks were up to or where they were headed. Envying them of a warm bed had nothing to do with my hike. It was just a buzz kill. It was deflating. Don’t envy others. You don’t know what their destination really is, let alone their journey.

Lift up your head

Initially, I was surprised that I had to be completely present for the entire hike. Every step mattered. In fact, you have to be hypervigilant. All I would focus on, outside of the random passerby and Roy, was the trail beneath my feet. Every root, rock, leaf, and branch. Every white blaze. Walking through what is referred to as the Green Tunnel, I had to actually stop and lift my head to take a look around. To look at the autumnal foliage, to take a picture of flowers alongside the trail, to look out at the view from the knife’s edge of a ridge. This gave me renewed gratitude for walking in my neighborhood. I don’t need to be vigilant for a random root or slippery rock. There were countless times when my hiking shoe got hooked on a random root. The struggle to stay upright was life-affirming; it shines a light on stopping to lift up your head and look around. Observe the beauty that is the trail.

You are where you are

Roy told me, during what felt like a two-mile plus journey during the last mile of our first day, the last mile is always the longest. There were no mileposts. On places where I had day hiked, like Fort Macon, there were mileposts every .2 miles. I was used to knowing where I was and the progress I have made. It is reassuring. On the A.T.? No such luck. We may have scrambled on rocks for 20 minutes and I would feel like we had made a half mile of progress. However, scrambling over rocks only moves you a few feet forward. Not all portions of the trail are created equal! Some are smooth, wide and straight forward (which is rare); some are narrow, winding and covered in boulders, meant to be scrambled over with your hands and knees. At one point, on the second day, I had been going downhill and I was exasperated. I knew that there was a landmark shelter somewhere on the trail. I asked Roy, “Where is the f$%#ing shelter?” I am not proud of my exasperation. My knees were aching from all the downhill, I was past all the challenging parts we had dealt with on the way up, and I had camped outside and peed in the woods. I was sweaty and tired and all I wanted was to have a sign we were close to our destination, the NOC. I wanted a chair and a hot cup of coffee. The thing is, there was no escalator, moving sidewalk or Uber to pick me up. Regardless of where you are, you are where you are. Relax and take one step at a time. One stiff foot in front of the other. Anticipating where you want to be isn’t helpful. Be OK with where you are right now.

Backpacking on the A.T. is life-affirming. To complete a section is an accomplishment, regardless of whether or not one thru-hikes the whole thing. Experiencing hoisting everything I need on my back, and looking only three feet in front of me brought me back to myself. It didn’t matter what was going on in the world. What mattered was right in front of me and I had renewed self-assurance that I could accomplish whatever I wanted to take on. The key to it all? Hike your own hike.

One thought on “Hike Your Own Hike”