I had the great fortune to attend a lovely wedding in Dewey Beach, Delaware recently. It was a long 7-hour drive from my home in North Carolina, so I decided to stop off in Chincoteague, Virginia for a night’s stay. Assateague and Chincoteague are very foggy memories for me. I grew up in Wilmington, Delaware and we took many trips when I was a child along the eastern seaboard. I faintly remembering the trip to Assateague and wanting to see the fabled ponies but it was a lingering memory of disappointment. I don’t remember seeing the ponies. So, this was a trip to recapture something I simply could not remember. It did not disappoint. 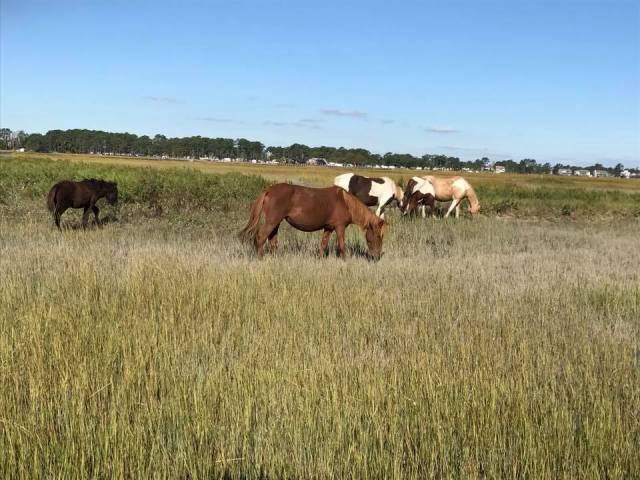 I made a reservation on the highest rated boat excursion on Trip Advisor called Daisey’s Island Cruises. When I called, the guy recommended a 9 AM ride, so I made the reservation. I was relieved to not be going on the trip the afternoon I arrived because I was road weary and wanted a good night’s sleep.

These were the highlights of the trip:

Small boat.  Daisey apparently operates several large and small boats but we were on a pontoon boat that sat about ten people. There were seven of us including Captain Nate on the boat. I had expected a larger boat and a slew of people much like a boat ride around Manhattan with a prerecorded tape pointing out the sights. This was much more intimate and there was no preset destination. Kind of like a road trip on a boat with no particular agenda; an open book for discovery. If you can choose, get on the smaller boat as it will be more of an adventure.

Dolphins. Captain Nate was on his radio as soon as we left the marina. He said he had a surprise for us as soon as we left the port. Sure enough there ten to twenty dolphins swimming in the channel right outside the marina. It was amazing. We must have sat out there for some thirty minutes as a whole pod of dolphins wrestled in the water. I felt like Jacque Cousteau observing these friendly creatures. Just seeing the dolphins was enough for me but there was so much more.

NASA.  We passed Wallops Island and saw all the launch pads for unmanned missions to resupply Spacelab and a host of other missions. There have been over 1,500 launches since the Mid-Atlantic Regional Spaceport was developed back in 1947. So you don’t need to travel all the way to Florida to see rockets take off. Apparently, you can check out the scheduled launches on the NOAA website. All this on a six-square mile island off the Eastern Shore of Virginia.

Chincoteague Ponies.  As mentioned earlier, I had it in my mind that looking for ponies would be a letdown. As we traveled across the water at a fair clip, I assumed that we would be staring at vacant marsh land. But Captain Nate and the other Daisey boats were in constant communication. There were two ponies spotted and we were off to find them. As we sped towards the coast there were two ponies eating marsh grass oblivious to us encroaching on their space. Captain Nate pointed out into the distance at three other ponies and the Stallion off in the trees. Because we were on a small boat we were able to travel up a shallow creek bed to be less than ten feet from the ponies. There were the unseen ponies from my childhood only feet away. Absolutely magical.

Birds.  There were all manner of birds on the trip. There was a whole set of cormorants drying off their wings as they sat atop moorings in the middle of the water. We rode by only feet away but they sat regally benign to our presence. White crane were fishing in the marshy shallows. Seagulls were flecked among the sky. It felt like nature was conspiring to impress me at every turn.

Shellfish.  We passed by countless oyster beds. Apparently, the beds are leased by fishmongers and we happened to see one group out among the beds harvesting oysters. We came up on one bed and Captain Nate laid down and picked out a mass of oysters. Apparently, they grow on each other’s shells, so the one handful was several oysters, some 5 years old and others less than a year depending on size. He shucked the oyster to reveal an enormous thumb size oyster meat which he promptly ate when everyone on the boat turned it down. We also rode by clams resting in the sea water in crates; apparently, a catch being kept for future shipment.

I never imagined that there would be so much so much to see and take in. If you ever get to the eastern shore of Virginia, I highly recommend a boat trip to Assateague Island.